New Delhi: “Modi ko haraa ke jaaenge, bill wapas karvake jaaenge (We will leave after defeating Modi, we will leave after the laws are repealed),” chant women protesters as they walk through the Ghazipur protest site on the Delhi-Uttar Pradesh border, carrying green and orange flags.

These two colours are rarely seen together in an India filled with communal tension, except on the national flag. But at Ghazipur, they fly together.

Waseem Chaudhary, a 25-year-old farmer from Muzaffarnagar, sits atop a cart with other farmers discussing Bharatiya Kisan Union (BKU) leader Rakesh Tikait’s ideas. As a Muslim, he says, he has become immune to the hurt that comes from being called a ‘terrorist’ and ‘Pakistani’. “Bolne waale bolte rahenge, hum kisaan iss dharam-jaat se bohut upar hain, yeh qaum khilaane waali hai, lootne waali nahi (Let them say what they want to, we farmers are way above caste-religion; we are a community that feeds and not one that loots),” he said.

Discussing the unity between the farmers, Waseem told The Wire, “By labelling us as Khalistani and Pakistani, they thought they would recreate the Shaheen Bagh chaos and Delhi riots here. But our unity has kept us going these three months.” 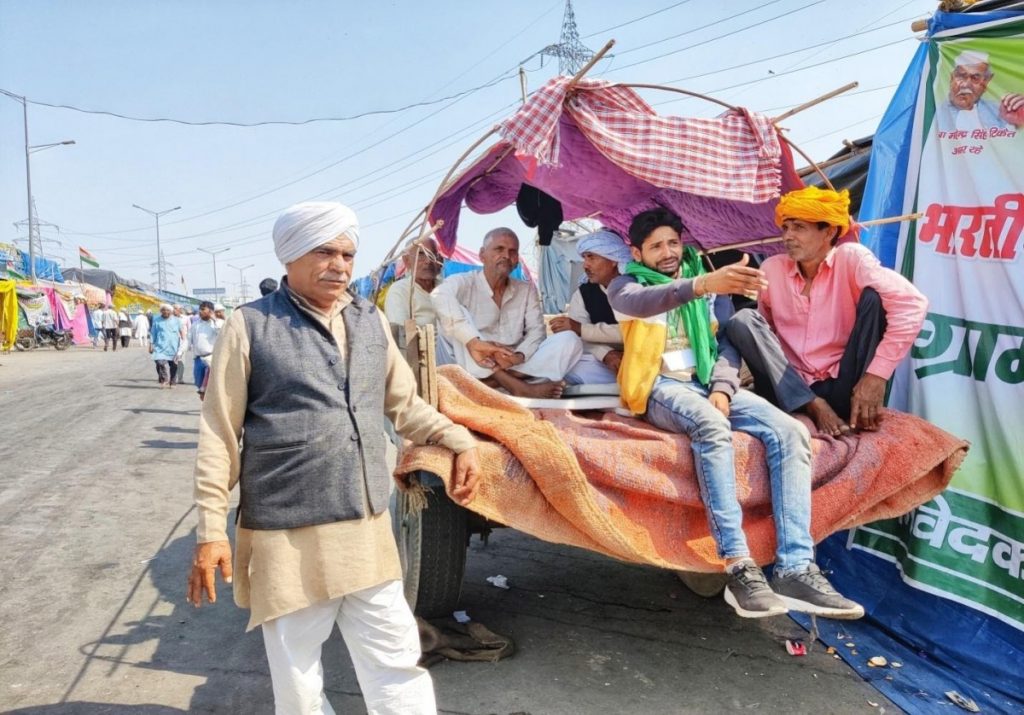 Farmers sit atop a cart at the Ghazipur protest site. Photo: Tarushi Aswani

Sandeep, a farmer from Soram, UP, speaks of how the laws betray the farmers who have spent their lives knee-deep in soil. He is scathing about a reported attack on the villagers of Soram by an aide of the BJP’s Sanjeev Balyan, who had visited the region recently only for slogans to have been raised against him on the new farm laws.

Soram is understood to be an important junction of the Balyan khap (community of clans), to which Sanjeev Balyan, as well as BKU leaders Rakesh Tikait and Naresh Tikait, belong. Such an attitude from the BJP reflects how intolerant the party members are to even the smallest opposition, said Sandeep.

“They have decided they just don’t want to listen. Rather, they want to communalise this protest and show everyone involved in it in bad light,” said Sandeep. “Even the most illiterate farmers today know what ‘godi media’ (lapdog media) is.”

‘The opposite of the Delhi riots’

Overseeing the preparation of the daily langar that he helps to serve each passerby, Neeraj Balyan sits beside Waseem, reminding him every day to offer the zuhr namaz (afternoon prayer) before lunch.

Hailing from Bulandshahr, Mohammed Moinuddin has been camping at the Ghazipur protest site ever since the sit-ins began. The protests aren’t anti-national or anti-BJP, he said. They’re anti-farm laws. With his two daughters, Iram and Afiyah, Moinuddin distributes langar to everyone he sees. Iram, 11, has been standing by her father since they arrived at Ghazipur in late November 2020 and is determined to keep the protests going by serving every protesting farmer.

When The Wire asked Moinuddin what he thought about the label ‘aatankwaadi’ (terrorist) foisted on farmers by some right-wing groups, Vijendar Singh, a farmer from Amroha, answered. “Yeh inhe ‘aatankwaadi’ nahi bolenge toh sarkar kaise banegi (If they don’t call them terrorists, how will they form the government)?” asked Vijendar, adding that the farmers’ protests are unifying Hindus and Muslims again, after the communal violence of the Delhi riots. 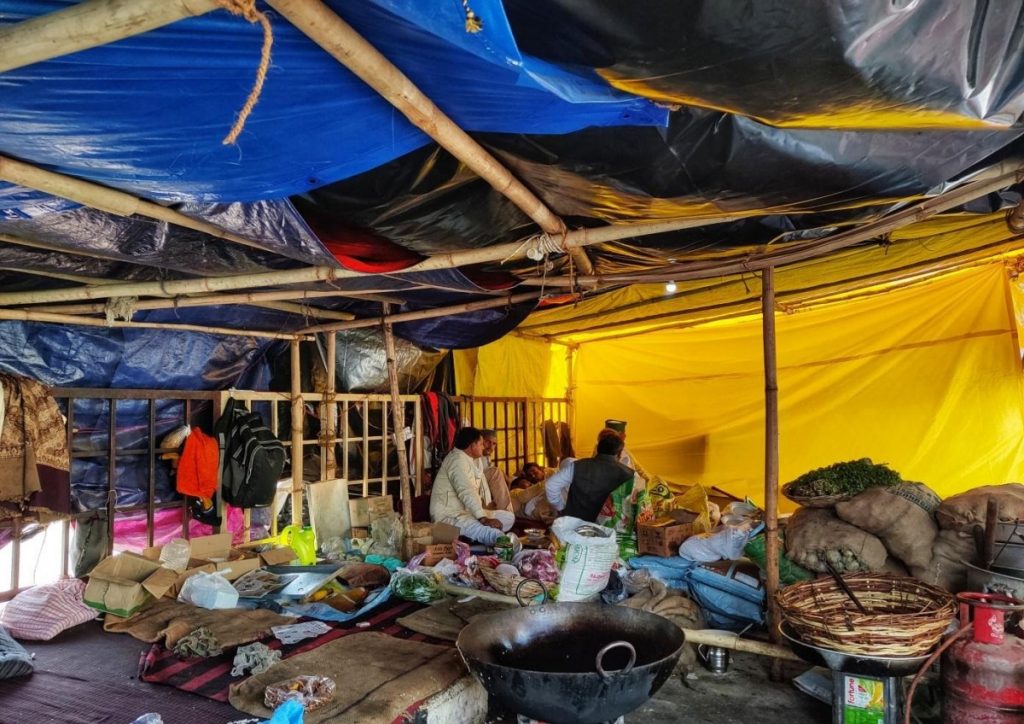 Amid preparations for langar, farmers rest in a tenement in Ghazipur. Photo: Tarushi Aswani

Saleem Qureshi, who has been working at the Ghazipur Sabzi Mandi for 25 years, said that each religious community among the protesters is subjected to the same kind of insulting ‘labelling’, but this has bridged the gap between Hindus, Muslims and Sikhs.

“Kisaan andolan Dilli dangon ki ulti tasveer hai, jitna wahan nafrat thi, utni yahaan ekta hai (The farmers’ protests are the opposite of the Delhi riots. The brotherhood we have here is deeper than the hatred that was displayed then).” he said. “Whoever speaks against the government is either jailed or killed, but we will only return home when the bills are repealed.” 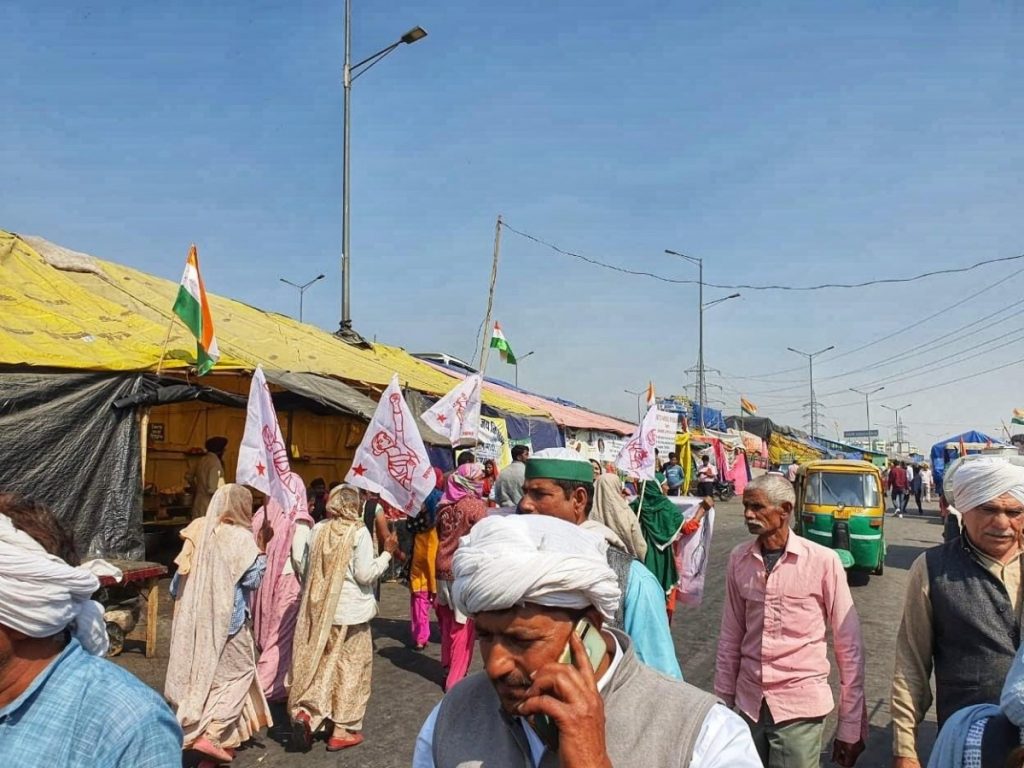 The farmers have turned their protest into a whole ecosystem to support their struggle for the roll-back of the new laws. Photo: Tarushi Aswani

“The government is scared of our unity,” claimed Sukhdarshan Singh, who has been living at the protest site for three months. A farmer from Amroha, Singh believes that when labels such as ‘Khalistani, Pakistani’ are used to reference the communities participating in the protests, they are meant to provoke one community against the other. The narrative that was ‘manufactured’ during the January 26 chaos, he said, was meant to instigate people against the Sikh community.

“If the government thinks they can break us with these tactics, they are certainly mistaken,” said Singh. “The kind of grit and patience that we farmers have will make the government repeal these laws.”

Singh has no patience for politicians. “When any party wants to come to power, their first move is to promise to waive the loans taken by farmers. But when farmers stand up to the government, they are labelled as Khalistanis,” he said. Referring to the violence at the Red Fort on January 26, he asked, “Why did the PM not utter a word when 250 farmers were martyred? Is he not the PM of those killed or their grieving families? But he made sure to coin the term ‘andolanjeevi’. Why is it that when the PM ties the same flag on his forehead, it is called satkar (respect), but when it is hoisted at the Red Fort, it becomes Khalistani?”

Singh said he will not go home until the farm laws are repealed. He quoted Guru Nanak: “Jo tau prem khelan kachau / Sir dharta liga limer iaau / It marag pair dharijay / Sir deejay kaanna keejay (While playing this game, you’ve put your head on your palm; if you set foot on this path, don’t hesitate to lay down your head).”

Waseem, Neeraj, Moinuddin, Sukhdarshan, Saleem and Vijendar believe they are united as farmers, despite attempts to divide them into Hindus, Muslims and Sikhs. Together with hundreds of people like themselves, they believe that this is a protest not just limited to farmers, but one that concerns everyone who needs to eat. This is a protest that unites humanity and stands above all communities based on religion, class, caste and kinship, they say.